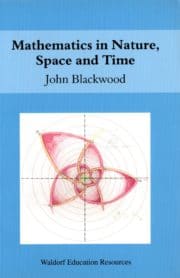 By waiting until this point to begin Cartesian geometry, the eleventh grader is ready to fully absorb this important topic, and this workbook does it in depth with four separate units.  Through a year and a half of study, this workbook weaves together Cartesian geometry, trigonometry, complex numbers, and other key topics found in traditional algebra II and precalculus courses, and ends with two great units of calculus.  Any student completing this book is poised to study anything in college!

Jamie York’s search for meaningful education led him to Shining Mountain Waldorf School (in Boulder, Colorado), where he started teaching math in 1994. In addition to teaching middle and high school math, Jamie consults at Waldorf schools and teaches math workshops across North America. In the summer, he serves on the faculty at the Center of Anthroposophy (in Wilton, NH) as part of their Waldorf High School Teacher Education Program and adjunct professor of Antioch University, NH.

Andrew Starzynski grew up steeped in Waldorf education as the son of two Waldorf teachers, and as a student at the Chicago Waldorf School, which he attended through high school.  Andrew went on to attend Beloit College, graduating in 2001 with a double major in mathematics and philosophy, and a minor in computer science. He taught part-time at the Chicago Waldorf School before spending two years in the computer industry. In 2004, his love of math led him to graduate school where he acquired his master’s degree in applied mathematics. His enthusiasm for Waldorf education and Waldorf math prompted his return to the Chicago Waldorf School where he taught for three years. In 2008, Andrew completed his Waldorf teacher training under the tutelage of Jamie York. Andrew has taught math and computer science at Honolulu Waldorf School and Waldorf Academy in downtown Toronto. He currently lives with his wife and two sons in Richmond Hill, Ontario, Canada where he teaches at the Toronto Waldorf School.